The title of this Interruption is also the title of a book just published. I knew this book was going to come out a while back and pre-ordered the book to be wirelessly delivered to my Kindle.

It didn’t show up.

But I knew it was due out in mid-October, so I checked Amazon on the publishing date and there it was… 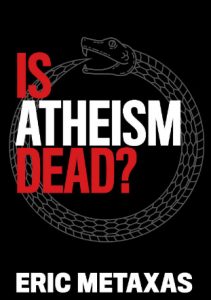 When I downloaded this book, I was like Ralphie opening his Christmas present to find an Official Red Ryder, carbine action, 200-shot, range model air rifle.

Questions flooded my mind – would I have a weapon capable of silencing Richard Dawkins and other New Atheists with a single shot? Would memorizing this book enable students to stymy arrogant college professors? Would all atheists and agnostics bow down and give homage to the evidence for God and the Bible?

Barely able to withhold a shout of “Hallelujah!”, I opened the book to find in the Introduction:

Atheism declares that there is no God, and it claims that this is a rational position, but atheism does not attempt to do much beyond convincing people of this idea. So although I might not be able to convince the reader of specific details of the Bible or of the truth of some of the doctrines of faith, I can certainly hope and even expect to convince any rational person that atheism is no longer an option for those wishing to be regarded as intellectually honest.

Wow – atheism can no longer be “regarded as intellectually honest” – a double shout of “Hallelujah!”

What a statement! In an age where no one wants to claim anything, Eric Metaxas has a full load of 200 shots in this book. The book gets even better.

We may all have excellent questions and may doubt many things, and we may even be hostile to many expressions of faith and might reasonably call ourselves agnostics. But the idea that anyone can at this juncture say they believe there is no God—much less know such a thing—must henceforth be regarded as willful unreason or as a mere affectation, or perhaps both.

Willful unreason or as a mere affectation – I wish I had this ammunition when I argued with atheistic professors in college.

However, the evidence contained in this book is mostly accumulated in the past 40 years!

The implications of the Big Bang, a finely tuned universe, that life doesn’t come from non-life, and incredible new archeological discoveries proving the reliability of the Bible, continue to pile up.

As Eric Metaxas writes, “‘The Bible is confirmed by every turn of the archeological spade’ has become a popular catchphrase.”

This book is so good that I kept thinking, “The book can’t be this good.” I began to feel like Ralphie when everyone told him that if he got the Red Ryder, he would shoot his eye out.

Wrong eye – atheism, not my faith!