Some of the best books in the history of Christianity have been written in the last 20 years.

Atheism and agnosticism are overwhelmed today with recent evidence for the existence of God, the reliability of the Bible, and the historical fact of the resurrection.

If you are intellectually honest, there is no reason to live a life of disbelief. Questions have answers, doubt finds faith, and frustrations have hope. Only those with a hidden agenda could possibly conclude that Jesus isn’t the way, the truth, and the life.

What books are my favorites?

The exact opposite is true.

The elegance and complexity on the molecular level have been increasingly studied with total embarrassment to evolutionists. Science – ignoring evidence and stuck in dogma from the past – still uses the overruled term “evolution.”

William Lane Craig’s On Guard tied with Paul Copan’s True For You But Not For Me.

Culture spouts relativism as justification for belief and then reverts to inherent truth when something offends them.

Have you heard this: That’s your truth? Then from the same source:  That’s objectionable. How can there be “objectionable” if truth doesn’t exist?

These two books combine a knock-out blow to relativism.

N.T. Wright’s The Resurrection of the Son of God.

One of the most influential books that no one reads. If someone attempts the task, they give up before reaching the end of almost 800 pages of small type.

If you don’t read it, feel free to quote my summary, “This book takes every objection to the literal and physical resurrection of Jesus and obliterates them. It throws the objections to the ground and walks all over them with historical fact.”

An atheist once challenged me to pray for a healing to prove the existence of Jesus. I didn’t try. But today I would suggest that he read this book.

Read the recently published book. It amasses evidence from science, archeology, and philosophy.

Metaxas gives a list of great atheists who found God. Did you know that the greatest atheist of the last century became a theist? Read his story in chapter 21.

I become ill listening to progressive thinkers debunk the Bible under the guise of authentic doubt. These teachers – wolves in sheep’s clothing – offer questions as a replacement for faith.

After reading this book you will doubt the doubters and return to faith.

Whether an e-book on Kindle or one of ink on the page, consider buying a book for someone this Christmas. 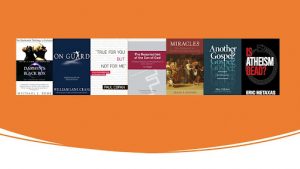