Archeologists have found the childhood home of Jesus. Have you heard this amazing fact?

I have been on five tours of Israel, and every time that I visit the land of the Bible, the tour guide says this about Nazareth, “There isn’t much to see in Nazareth, just the Church of the Annunciation built on the site of the angel Gabriel’s announcement to Mary about the conception and birth of Jesus.”

Important, yes, and this site has a lot of archeological evidence supporting this as the place of Gabriel’s visit to Mary. But it has diminished appeal because of the large modernistic church sitting on top of the site.

Not once in my five visits did my tour guide say, “We should go see the childhood home of Jesus in Nazareth. You can see the actual stone walls built by Joseph!” (Greek Note:  Most translations of the Bible translate the Greek word “tekton” as carpenter, but it can be used for both mason and carpenter.)

If I had known you could see the walls of Jesus’s house – hand built by Joseph – I would have gone to that site. I would stand amazed. I would praise God. And on subsequent trips that I lead to Israel, we are going to the childhood home of Jesus.

(Photo used by permission of www.HolyLandPhotos.org.) 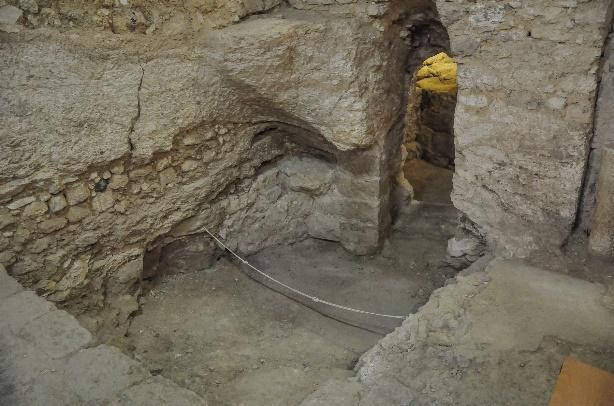 In 1881, the French sisters of a Nazareth convent found the house while excavating for their chapel. Then nothing was done archeologically until Ken Dark (scholar and archeologist from England) began an official study of the site in 2006.

What!? No headlines about the childhood home of Jesus being found?! Amazing that this discovery has been kept in the dark (pardon the intended pun).

Eric Metaxas, in his book, Is Atheism Dead?, writes the following about the lack of headlines concerning the childhood home of Jesus…

There can hardly be anything more extraordinary than this discovery, although there is one thing that may come very close, and this is that news of this earth-shaking discovery has been so extremely poorly communicated that it has the misfortune actually of seeming intentional.

Wow. The Bible teaches that credible support, scientifically, philosophically, and archeologically, will gather in the latter-days to the point that those who disbelieve will have no excuse on the Judgment Day.

No wonder some of this overwhelming evidence has been hidden from us by our Adversary.

As for me, I’m considering leading another tour to Israel. I guarantee that we will be going to Nazareth to see the childhood home of Jesus.

Do you want to come with me?