I was reading Ezekiel 44 today:

Then he brought me back to the outer gate of the sanctuary, which faces east. And it was shut. And the Lord said to me, “This gate shall remain shut; it shall not be opened, and no one shall enter by it, for the Lord, the God of Israel, has entered by it. Therefore, it shall remain shut. Only the prince may sit in it to eat bread before the Lord. He shall enter by way of the vestibule of the gate and shall go out by the same way.”  Ezekiel 44:1-4

There are thousands of photos of Jerusalem taken by both professional and amateur photographers on iPhones, Nikon and Canon cameras, and Samsung smartphones.

The best photos of the old city are taken from the Mount of Olives. The photos will show the walls of Jerusalem with the golden dome of the Dome of the Rock, an Islamic shrine located on the Temple Mount.

Off to the right of any photo, you will see a closed gate, sealed with stones. Ezekiel was written about 600 B.C. and the Eastern gate was walled up in about 1,500 A.D. A prediction in the Old Testament fulfilled two thousand years later.

The old walls of Jerusalem were rebuilt by the Turkish leader Suleiman, but during the rebuild, he ordered the Eastern Gate to be sealed.

I enjoy reading Ezekiel chapters 40 through 44 because the chapters are the Bible’s prophetic view of the temple during the Millennium. My daughter recently sold her house and the real estate agent put a video walk-through online. In Ezekiel, you get the prophetic walk-through of the soon-to-be rebuilt temple of the Millennium.

Consider the closed gate. One of my favorite writers specializing in Biblical prophecy is Dr. David Reagan. Having attended church for 30 years, he had little understanding of prophecy.

Then Reagan read a news account that during the recapture of Jerusalem by Jewish commando groups, the soldiers were forbidden to blow open the Eastern Gate to gain quick access to the city. The reason as explained by the leader of the commando group, an Orthodox Jew, the Eastern Gate can only be opened when the Messiah comes.

The Eastern Gate is proof positive that the Bible is the Word of God. Its sealing is clear evidence that we are living in the end-times. The gate awaits the return of the Messiah. Then and only then, will it be opened. 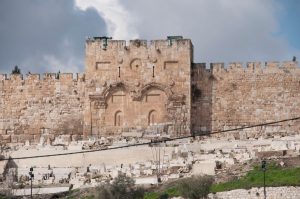 “Hmmmhhhmmm,” I thought this morning, “Prophecy predicted in 600 BC., the gate sealed in 1,500 AD, Jerusalem captured by the Jews in 1967, and the gate not blown open – coincidence? I better be a good Pastor Grant, as Jesus is returning soon!”

There are 600 prophecies in both the Old and New Testaments of exact events that will take place in the end-times. If you memorized all 600 and lived a hundred years ago, you would note few fulfilled.

Today, the 600 prophecies are like the predicted “flowers in the desert” prophecy in Isaiah 35:1-2, as they are blooming in abundance.

You should be good as well (or rather claim the grace of Jesus) as you will see Him soon.